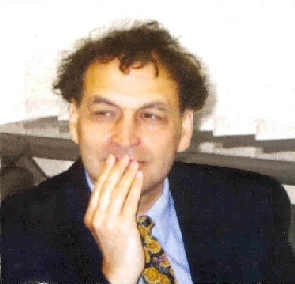 Doctor of Philosophy, literate, Honourable Doctor of the National University of Kyiv-Mohyla Academy, lecturer of NaUKMA, first director of the America House in Kyiv, founder of the America House Library, which in its turn became the foundation of our American Library.
At the same time, Viktor Kytasty was the director of the Ukraine Parliamentary Program of The Association of U.S. Congress Former Members, head adviser of Economics Education and Research Consortium-Ukraine (EERC-Ukraine).

The American of Ukrainian origin he lived and worked in Ukraine since 1992 until his untimely death in 2000.

He is a sun of Hryhory Kytasty (1907-1984), the prominent Ukrainian bandura player and composer, director of the famed Ukrainian Bandurist Chorus of Detroit. Viktor Kytasty is the creator of The Arts of Kobzar Project, which aimed to preserve for future generations the unique features of national culture by modern technologies.

Viktor Kytasty, as a member of the NaUKMA Library Friends Club, did everything he could in order to build up our library.