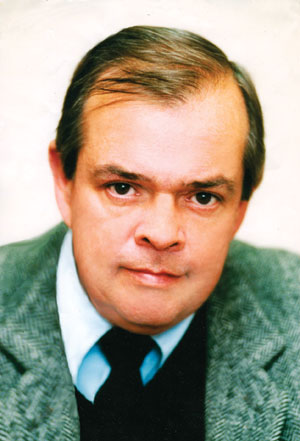 James Mace was born in Oklahoma, on February 18, 1952. He did his undergraduate studies at the University of Oklahoma, graduating with a B.A. in history in 1973. He pursued his graduate studies at the University of Michigan, where he studied with Roman Szporluk, receiving a Ph.D. degree in 1981 with a thesis on national communism in Soviet Ukraine in the 1920s. Starting in July 1981, Mace worked as a postdoctoral fellow at the Harvard Ukrainian Research Institute. Following the advice of Omelyan Pritsak, the director of the Institute, he started doing research for Robert Conquest’s book on the Great Famine in Ukraine, The Harvest of Sorrow. From 1986 to 1990, Mace served as the executive director of the US Commission on the Ukraine Famine, in Washington, D.C.
In 1993 he moved from the United States to Ukraine. Since 1995, he was a Professor of Political Science at the National University of Kyiv Mohyla Academy. He also taught at the Christian University in Kyiv and worked as style editor for the newspaper Den’ (Day).
Mace passed away in Kyiv at the age of 52.

James Mace had started to collect his private collection since the end of the 1970s while he was studying at the University of Michigan and that time he started doing research for the Soviet historiography of the 1920s.

At the end of 2005, Natalia Dzubenko-Mace gave Mace’s Library and Archive collection to the National University of  Kyiv Mohyla Academy.

Archive collection represents scholar, research, educational and public activities one of the first researchers of Holodomor 1932-1933. Archive and Library collections of James Mace, which are located at the NaUKMA, contain the materials that describe Mace’s life, academic activities and represents Ukraine history of the twentieth century in the USSR and abroad.

Library collection counts over 1200 volumes of scientific works, periodicals, and other documents. The Library collection’s chronological parameters are 1825–2004. The main part of the collection – over 1 000 volumes – are Ukrainian and Russian historical and political works of the twentieth century. James Mace's collection contains rare editions of XIX-XX centuries on the history of Ukraine, world philosophy, works of favorite writers: Nathaniel Hawthorne, Walter Scott, Anthony Bennett.

The Library collection is fully represented in the electronic catalog.